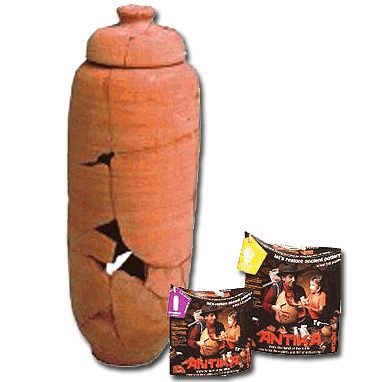 The original Jars of the Dead Sea Scrolls were discovered in the summer of 1947 by a Bedouin boy who went climbing up a cliff near Qumran. Looking for a lost goat, he picked up a stone and tossed it into a cave... alas, no goat came scampering out, but he did hear the sound of crashing pottery. This was the beginning of the most exciting and important archaeological discovery of the 20th century: that of the scrolls related to the Essenes, a Jewish/Christian sect that lived there 2000 years ago.

The Essenes, withdrawn into the wilderness to escape persecution by the Pharisees, lived a communal life that bore a remarkable resemblance to the early Christians. There is no doubt, despite all the mystery and controversy that surrounds the Dead Sea Scrolls, that the Essenes had an enormous influence on both John the Baptist and on Jesus of Nazareth.

The original jars of Qumran were obviously used to store scrolls and other precious parchments, were about 50-65 centimeters (25-32.5 inches) in length, and are on display today in the Shrine of the Book, Israel Museum, in Jerusalem.