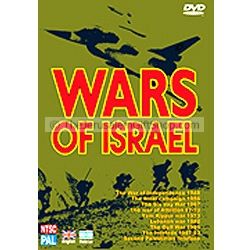 Featuring up-close, intimate footage and highly informative narration, "Wars of Israel" provides a comprehensive and engaging journey through the military history of the modern state of Israel.

Experience the struggles and the joy of the War of Independence (1948), when five heavily equipped modern armies struck at this tiny nation on the day of her birth, sending her citizens scrambling to form make-shift weapons of irrigation pipes and other agricultural tools.

Discover the military genius that led to stunningly rapid victory in the Six Day War (1967), in which the Israeli Air Force bombed entire Arab airfields while their pilots still sat drinking their morning coffee, a triumph which led to the joyous reunification of the Holy City of Jerusalem and the destruction of her dividing walls.

Hear the incredible legends that survived the Yom Kippur War (1973), in which solitary Israeli tanks held off entire Arab divisions.

Witness the miracles shown Israel during the Gulf War (1991), the first war that Israelis had the leisure to "sit back and watch" from behind their gas masks as U.S. defense systems exploded incoming Iraqi missiles like fireworks in the sky.

Through footage of key terrorist attacks and discussions of their aftermath, learn more about the utter destruction of the Palestinian Intifadas(1987-1993, 2000- ), a war in which Israel still finds herself entangled.

The Sinai Campaign of 1956, the War of Attrition from 1967-1970, and the invasion of Lebanon in 1982 are also included, providing an extensive overview of this war-torn nation's heroic past... and present. Private interviews, speeches, addresses, and commentary from Golda Meir, Shimon Peres, Yitzchak Rabin, and Yassir Arafat himself make "Wars of Israel" the most thorough, enlightening, and intriguing film available on this subject.

Important Features:
Discussion of the biblical, historical, and political roots of the Mid-East conflict
Detailed "before and after" maps for every war that clarify shifting territory lines
Visual illustration of attack points
In-depth discussion of Israeli land, air, and anti-terrorism defense strategies